Our Prayer Partners in the Northern Texas Northern Louisiana Synod

Each week the churches in the NTNL synod pray for one another and the ministries in our synod.
​​
This week we pray for Trinity Evangelical Church in Miles, ELCA Coaching, and Creativity in Ministry.

This week we pray for

In April 1953, the Mission Board of the Texas District, Lutheran Church - Missouri Synod (LCMS) extended a call to Pastoral Candidate Lester Hall, to begin a mission in the fast growing community of Irving just across the Trinity River from Dallas.  Irving's population increased from 2,621 in 1950 to an estimated 22,500 in 1955.  A canvas made by Albert Grauer of the Irving area from April 1 - August 1, 1953 indicated that there were 60 Lutheran and 167 un-churched prospective members.  Rev. Hall, a June 1953 graduate of Concordia Seminary, Springfield, Illinois, accepted the call on June 8.
The first worship service was held at 3:00 PM on Sunday August 30, 1953 in the cafeteria of East Elementary School (now J. O. Schulze Elementary) located at 1200 S. Irving Heights Dr. with an attendance of 225.  At worship on September 6 Pastor Hall proposed naming the congregation "Good Shepherd".  The new congregation moved to Irving High School (now James Bowie Junior High) at 600 E. 6th St. where the auditorium was larger on September 20.  On November 8 the congregation adopted a constitution (signed by seventeen) in a meeting held at the home of Lee Johnson.  A total of 137 signed the charter, three of which are currently members.
The new congregation approved the purchase of a five acre tract of land (the current property) from W. W. Fisher, Sr. at a price not to exceed $10,500 on November 15.
On March 20, 1955 the cornerstone was set, made by Bernhard Porath, in the NW corner of the Parish Hall with the inscription: "To the Glory of God - 1955."  Additions to the complex were dedicated in 1962 and 1969.
In September 1963 the Christian Day School began operation.  The school grew to include grades K-6.  Prior to its closure in May 1985 the school had enrolled 715 students.
Within the LCMS, disagreements and conflicts had apparently been going on for a number of years over a range of subjects.  Resolutions passed at the 1965 Synod Convention, held in Detroit, Michigan, caused current Pastor Norman Behrmann and Good Shepherd to eventually become involved.  On February 17, 1974 conflict at Concordia Seminary in St. Louis caused the Voters of Good Shepherd to formally dissent with the current policies and positions taken by the leadership of the LCMS.  In June 1976 the Voters approved joining with other Lutheran congregations from Texas, Oklahoma, Kansas, and Nebraska to become founding members of the Association of Evangelical Lutheran Churches (AELC).  Good Shepherd delegates attended the constituting convention of the Southwest Regional Synod of the AELC in Oklahoma City on November 12-13, 1976.  As a result of this affiliation Good Shepherd's membership in the LCMS was terminated in May 1978 by action of the Texas District.
Major celebrations occurred in 1988 as Good Shepherd and the AELC merged with the Lutheran Church in America (LCA) and the American Lutheran Church (ALC) on January 1 to form the Evangelical Lutheran Church in America.  Then on May 1 the congregation dedicated its newly constructed worship space with seating for 240, numerous stained glass windows, a Cross tower, and a refurbished 1909 Hinners pipe organ.  The original building, which had served as the worship space since 1955, was remodeled and now serves as the fellowship hall.
The congregation celebrated its 60th anniversary November 10, 2013 and continues to look forward to new opportunities for mission and ministry.

Good Shepherd has been served by eight pastors: 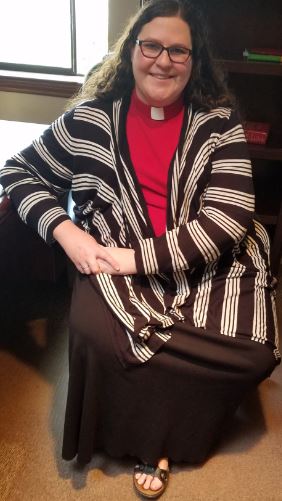 ​Pastor Kathryn Saunders-Allen graduated in May, 2017 from Trinity Lutheran Seminary in Columbus, Ohio with a Masters of Divinity. She also has a B.A. in Psychology from Oklahoma State University. She spent a year after seminary working as a chaplain in a Clinical Pastoral Education program at the Oklahoma City VA Hospital and is thrilled to have been called to serve Good Shepherd Lutheran Church as her first call. She believes that God works through all people for the good of creation and can't wait to see what God has in store for her here.

What We Believe
As a part of the Evangelical Lutheran Church in America, we subscribe to its confession of faith:

This church confesses Jesus Christ as Lord and Savior and the Gospel as the power of God for the salvation of all who believe.
a. Jesus Christ is the Word of God incarnate, through whom everything was made and through whose life, death, and resurrection God fashions a new creation.
b. The proclamation of God’s message to us as both Law and Gospel is the Word of God, revealing judgment and mercy through word and deed, beginning with the Word in creation, continuing in the history of Israel, and centering in all its fullness in the person and work of Jesus Christ.
c. The canonical Scriptures of the Old and New Testaments are the written Word of God. Inspired by God’s Spirit speaking through their authors, they record and announce God’s revelation centering in Jesus Christ. Through them God’s Spirit speaks to us to create and sustain Christian faith and fellowship for service in the world.

This church accepts the canonical Scriptures of the Old and New Testaments as the inspired Word of God and the authoritative source and norm of its proclamation, faith, and life.

This church accepts the Apostles’, Nicene, and Athanasian Creeds as true declarations of the faith of this church.

This church accepts the other confessional writings in the Book of Concord, namely, the Apology of the Augsburg Confession, the Smalcald Articles and the Treatise, the Small Catechism, the Large Catechism, and the Formula of Concord, as further valid interpretations of the faith of the Church.

This church confesses the Gospel, recorded in the Holy Scripture and confessed in the ecumenical creeds and Lutheran confessional writings, as the power of God to create and sustain the Church for God’s mission in the world.